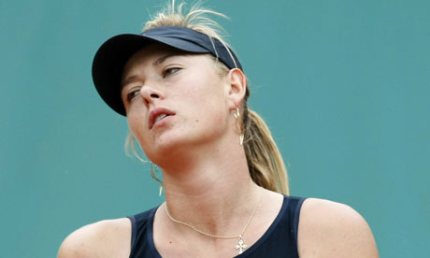 In a shocking confirmation of how quickly and how low Russian women’s tennis has fallen, there was only one Russian woman in the top 20 seeds at this year’s French Open tournament at Roland Garros, and only four Russian women were among the grand slam event’s 32 seeds.   A country that just a few years ago routinely accounted for a quarter of seeds and multiple top-ten entries has fallen from grace in a jaw-dropping manner.

Two of the four seeds, Pavlyuchenkova and Petrova, lost in the third round of the tournament, leaving only #2 Maria Sharapova and #26 Svetlana Kuznetsova to hold up the national flag in the fourth round.

It’s telling that the only Russian woman seeded in the top 20 was Sharapova, who has lived all her life in the United States and was taught to play tennis by American coaches. Not long ago, some sports pundits were predicting that Russian women would soon “dominate” the sport, but in fact Sharapova is the only “Russian” player to ever achieve any really noteworthy victories in Russia’s entire history. And Sharapova is about as Russian as hot dogs and apple pie, and it’s very clear even her achievements are much more due to good fortune than great skills on the court.  In every way that counts, she’s an American.

Meanwhile, in her fourth-round match Kuznetsova was blown off the court, failing to win a single game in the first set and barely making a struggle of it in the second. Kuznetsova struck a horrifying 38 unforced errors, more than twice as many as her opponent (who was not seeded in the top 20), and won well less than half of the points when she got her first serve in.   So, once again, this left only Sharapova, the non-Russian Russian,with a chance of getting to the quarter finals. Would Sharapova luck out once again?

We documented how Sharapova displayed her customary dumb luck in Italy before arriving in Paris, neatly avoiding having to play any of the major seeds she was drawn against before reaching the finals. And her dumb luck continued in Paris, where she avoided both the #9 and #22 seeds she should have had to face before reaching the quarter finals. Instead, in her fourth-round match Sharapova faced lowly world #42 Klara Zakopalova, a player who had never made it as far as the third round in a decade of trying at Roland Garros.

Unsurprisingly, Sharapova easily beat Zakopalova, who failed to put up any struggle at all, and then in her semi-finals match she faced world #4 Petra Kvitova, who in her own semi-finals match had barely managed to squeak past world #142 Yaroslava Shvedova of Kazakhstan after being down 2-4 in the third set.

In five prior meetings, Kvitova had beaten Sharapova only once when Sharapova did not forfeit, albeit that one match being a one-sided drubbing at Wimbledon last year. Two of Sharapova’s three match wins against Kvitova came in straight sets.

In other words, Sharapova drew a player she had dominated and who was playing at her very worst level. Amazing, isn’t it? And what’s more, due to the utterly wretched state of the women’s game at present, by beating Kvitova Sharapova could take over the number one ranking, making her the so-called best player in the women’s game.

And that wasn’t the half of it. Sharapova knew going into her match with Kvitova that should she prevail and reach the finals she would face a player, Sara Errani of Italy, who was not ranked in the top 20 players in the world.  That’s right — every single one of the top-twenty ranked players in the opposite half of Sharapova’s draw had already been eliminated, including the #1 and #3 players in the world, leaving Sharapova with a mere patsy for an opponent should she reach the finals.  This meant that Sharapova was all but guaranteed to complete a career grand slam, winning each of the four grand slams at some point in her career, if she could get past Kvitova.

The match between Kvitova and Sharapova, two former Wimbledon champions, shaped up as an epic battle to which tennis fans might have looked forward with relish. But that dream was shattered. Kvitova collapsed in pathetic fashion, playing like a qualifier, and then in the final Sharapova received an utterly non-competitive performance from Errani, who played like an amateur. Errani has one of the weakest, most pathetic serves in the women’s game, and had reached the finals only because of a spectacularly bad performance by her top-ten opponent in the semifinals, with her opponent striking more than 50 unforced errors.

In her first set with Errani, Sharapova struck three double faults to none by her opponent and eleven unforced errors to four by Errani.  But her unworthy opponent’s shots were so feeble that none of it mattered, and Sharapova raced out to a 3-0 lead.  Errani actually managed to break Sharapova’s serve despite being overmatched in every conceivable way, and then held serve twice to force Sharapova to serve for the first set at 3-5. Sharapova closed out the set, overpowering Errani as if she were a child.  In the second set it was more of the same, with Errani dropping serve in pathetic fashion to open the set and allowing Sharapova to walk off with the title without a struggle.

So Sharapova completed the career grand slam and retook the number one ranking, and in so doing she signaled that the women’s tennis game is near ruin. Great matches seem to be a thing of the past now, and titles are won by players who are a little less embarrassingly horrible than their opponents. This is the age of the Russians.  If you compare Sharapova to the other champions who have completed the career slam, it is palpable that she does not belong in their company. Sharapova’s one-dimensional power game and banshee-like shrieking on the court make her matches almost unwatchable, and seeing her lay claim to grand slam titles she does not deserve because of her remarkable good fortune is depressing, not compelling.