Yes, Russia still has a Communist Party; some myths really do die hard. [Communist Party Leader Gennady] Zyuganov runs for president on a regular basis, making him the Harold Stassen of Russian politics, only snarly and frightening.

Harold Stassen never once ran for president.  On numerous occasions he ran for the Republican presidential nomination, in other words for permission from the Republican Party to run for president, but he never got it, not once. On the other hand, he did run for and win the governorship of Minnesota on several occasions.

Zyuganov has never been elected to any office, ever, but he has appeared on the actual ballot for president many times. And Zyuganov has done very well when on the ballot for president of Russia. Last time, for instance, he came in second with over 17% of the vote, more than twice the total of his next-nearest competitor.  In his wildest dreams, Stassen never came in second in a national election.

What’s more, Zyuganov says that there was massive election fraud and he should have done even better. Besides that, the actual winner of the last election in Russia was Vladimir Putin, a proud KGB spy.  Putin has enacted policies like bringing back the national anthem of the USSR, rehabilitating Joseph Stalin, ending direct election of governors and senators and wiping out independent national television.  Many believe he has murdered, tortured and arrested his political opponents (Mikhail Khodorkovsky, Anna Politkovskaya  and Galina Starovoitova, to name just three).

So the point is this:  Buckley is a very, very ignorant, ridiculous little man, and his ignorance is typical of the filth-ridden sewage published by the New York Times about Russia.  The Communist Party isn’t a silly joke or footnote in today’s Russia, it’s front and center. The KGB has power. Soviet symbols are all over the place, and a neo-Soviet crackdown is well underway.  And part of the reason this is happening is that the New York Times generally, and maniacs like Buckley (and Ron Paul, and Pat Buchanan, etc.), have misled the world about what is happening and caused it to fail to recognize the need to confront and challenge neo-Soviet evil.

You hardly needed to read this report on the horrific flooding in southern Russia which has killed nearly 200:

Officials have acknowledged they were aware of the dangers posed by rising waters, but failed to deliver that information to the residents of Krymsk, the city of 57,000 devastated by the flood.

You already knew it was the case.

It is the same each and every time something like this happens in Russia, just as it was in Soviet times.  The government of Russia, embodied by the Kremlin and its hoard of proud KGB spies, simply does not care about the lives of ordinary Russians.

And it does not care for one simple reason:  Those ordinary Russians don’t demand to be cared about. They turn a blind eye as their government commits all manner of atrocities, from invading Georgia to murdering Anna Politkovskaya.

In fact, at best they turn a blind eye. At worst, they stand and cheer, or turn in their neighbors, actually carrying out such barbaric acts.  And they continue to elect and reelect Putin and his KGB cohort, and continue to allow them to roll the clock back on human rights.

Even as the reports of horror in Krymsk were rolling in, it was also being reported that the Russian Duma was putting the finishing touches on brutal new measures to block foreign human rights support and crush the Internet, the two last remaining vestiges of support for the Russian opposition movement. Also moving in the Duma is a law that would, in effect, make criticizing Putin and his cadre of demons a criminal offense, just as in Soviet times.

When Russians act this way, it’s very hard to feel sorry for them when natural disasters brutalize them.  There was a time when we saw Russians as innocent victims of their government, as oppressed by it as we were. But now, it’s hard not to see them as perpetrators, collaborators, and part of the problem, not the solution.

It has been announced that so-called “Russian” Maria Sharapova will carry the flag for Russia at the opening ceremony of the summer Olympics this year in London.

Can Russia sink any lower?  Maria Sharapova repudiated her country long, long ago. She traveled to the USA as a child and that is where she learned to play professional tennis, from American teachers.  She never returned to Russia to reside, and she is going to marry a non-Russian.  She is a full-time resident of the United States, where she owns real estate and pays taxes. She has hardly ever played for the Russian team, and when she has done so it has been without distinction.  She virtually never visits or spends time in Russia, much less does she even consider such a thing as living there.  When she speaks on the tennis court, she speaks English.

What’s more, Sharapova is an absolute scam, as we have said many times she should be called Shamapova.  Her so-called “victories” have come only due to pure dumb luck, when she has appeared in tournaments and watched all her serious competition fall by the wayside of its own accord, no thanks to her own wretched, one-dimensional play.  Even worse is her godawful, appalling, unbearable screeching on the court, which gives a bad name to the women’s game as much as her unwatchable play.

Is this really the best person Russia can offer the world to represent it at the Olympics? If so, that is a sad commentary on the state of this pathetic country. What about all the real Russian athletes, who live and train in Russia and work with coaches who do the same?  They have every right to be outraged by this absolutely insane decision on the part of Russia’s Olympic Committee, and to feel that their country is an even more hopeless mess than ever.

On American Thinker, Kim Zigfeld lays out the horrifying neo-Soviet crackdown now underway in a Russia ruled for life by a proud KGB spy, and points the finger of blame where it belongs:  At Barack Obama, this century’s answer to Neville Chamberlain. 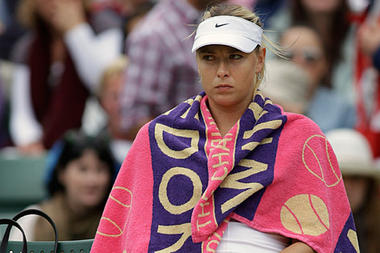 On Day 7 at the All-England club, tournament organizers had a choice:  Who to put on Centre Court, the #1 woman in the world, and the reigning French Open champion, playing the #15, or the #2 playing the #14.

Apparently, it was a no-brainer.  The club thought that Victoria Azarenka, #2, would play a far better match than the #1, so-called “Russian” Maria Sharapova, so Sharapova was relegated to Court 1. It was a painful public humiliation for Russia’s “best” player.

But Wimbledon was wrong.  Azarenka blew her opponent off the court in straight sets, with her #14-ranked rival taking just one game.  The match involving Sharapova was a bit more competitive, with the straight-set loser claiming seven games instead of just one.

And Sharapova’s match was more dramatic for another reason:  The so-called “best” player in the women’s game was the loser. In a match that lasted just 84 minutes, Sharapova saw her serve broken four different times by a player not even ranked in the world’s top 10, and she won barely half of the points on which she got her first serve into play.

And Sharapova didn’t just lose the match and the chance at a grand slam title. She also lost her #1 ranking, after holding it for just one month, the same situation that prevailed the last time she held the top spot. She won’t even hold #2, which will be taken over by the current #3 who reached the Wimbledon finals. Ouch.

Sharapova’s brutal triple humiliation at Wimbledon proves how right we were when we reported that her ascending to the #1 ranking due to recent tournament wins in  Rome and Paris was nothing more than the same dumb luck that has characterized her entire career. Sharapova coasted through both of those tournaments never having to face a serious match from a top-ranked opponent.  As soon as she faced tough opposition at Wimbledon, she folded up like a house of cards.

On June 30th, the U.S. Ambassador to Russia Michael McFaul tweeted about a meeting between U.S. Secretary of State Hillary Clinton and what McFaul called “civil society” at the U.S. Consul General’s office in St. Petersburg.  He linked to a press release from the U.S. Department of State about the event.

If you read the link, you will be quite confused.  Not only is not one single name of any person who is a member of “civil society” mentioned, but there is no clue about what they said to Clinton, or what Clinton said to them, or their reactions afterwards, much less is there the slightest hint about what the U.S. government is prepared to do to help them accomplish their mission.

And if you go out surfing the Internet, good luck trying to find any public comments made by either McFaul or Clinton about the meeting in the press.

It’s almost as if McFaul and Clinton are trying to hide the fact that this meeting is taking place, so as not to offend the Russians. Yet at the same time, they feel the need to try to dupe the friends of democracy into believing that they are taking action to oppose the horrifying specter of rising dictatorship and aggression in Russia.

Who does Barack Obama think he’s fooling?  Does he really think that empty, meaningless propaganda gestures like these could possibly fool anyone?

Then again, he got elected once. Who’s to say he’s not right.