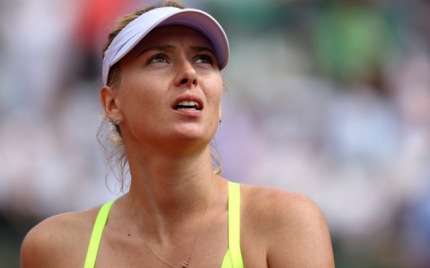 He’s not going to help you, dear.

If you were to learn that in a semi-final match at the French Open this year one of the players served a ghastly 11 double faults, had her serve broken five times in three sets (nearly twice per set) and tossed in a stunning 39 unforced errors, you’d probably speculate we were speaking about the loser of the match.

But no, it’s the “winner” of the match we were referring to.  Despite this horrific level of play Maria Sharapova, perhaps the luckiest human ever born to live, still managed to defeat her opponent Victoria Azarenka and reach the finals of this grand-slam event.

But maybe you think play this shoddy had to have been a freak occurrence? Hardly. In the match before it, Sharapova “defeated” Jelena Jancovic despite making even more unforced errors than she had against Azarenka, a whopping 45 of them, 15 more than she hit winners.  This time, her serve was broken “only” four times rather than five, so slight improvement there to make up for it.  But that didn’t prevent Sharapova from losing every single game in the first set against an opponent not even ranked in the world’s top 15 players.

In case you are keeping count, that’s EIGHTY-FOUR UNFORCED ERRORS in just two matches prior to the finals. Yet she still won.  For contrast, in her two matches before the finals Serena Williams had less than half as many unforced errors.

She shouldn’t have faced the #18 seed Jancovic in the quarters, instead she should have had to defeat the #7 seed Petra Kvitova, but Kvitova inexplicably lost to an unknown, unseeded opponent early in the draw.

But Sharapova was unabashed. She proclaimed: “I’m proud of the way that I came through this tournament. I have given myself a chance to face the favorite.” Face the favorite and do what, exactly, Maria?  Another dozen double faults, four dozen unforced errors, half a dozen service breaks and still come out the “winner” against the single greatest female tennis player the world has ever seen?

Sharapova stated that she’d need to “do something different” in her finals match against the “favorite,” world #1 Serena Williams.  This was surely one of the most laughable statements in the history of women’s tennis. Sharapova has an utterly one-dimensional game, her strategy being simply to whack the ball as hard as she can while shrieking like a banshee, and hope for the best.  She is simply not capable of making radical changes in her game to suit the circumstances.

So what Sharapova actually did was simply to amplify her standard game to the psychotic level, smashing every single shot with absolute maximum force and hoping for an amazing run of luck.  It worked at first, and she raced out to a 2-0 lead in the first set. But then it stopped working as it inevitably had to, and Williams won the next four games in a row, breaking Sharapova’s serve twice and taking a 4-2 lead.  Then Sharapova managed to hold serve for the second time, reaching 4-3.  By this time, Sharapova had made only 5 unforced errors to 10 for Serena, yet she was still down a service break. She then managed to level the match at 4-4, then promptly lost her own serve to drop to 5-4.  She had given Williams nine break point chances while being lucky enough to convert both of the mere two she received from Williams.  Despite Sharapova’s   manic bashing of the ball, Williams had still hit three times more winners  than Sharapova by the time she easily closed out the first set 6-4.

In her next service game, a fifteenth break point chance for Williams was converted easily, and Williams was up 2-1. In her third service game, at 1-3, she had game point and struck her hardest serve of the match. It was fired back at her for a return winner, and she lost the next service point as well, bringing deuce. Then she managed to hold. She held two more times, despite another deuce, and then Williams served for the title at 5-4.

Williams began by firing an ace, but followed it with an unforced error to let Sharapova draw even. Then a second ace, just like the first. Then two championship points.  Williams won the title on the first try, with a third ace of the game.  She had now defeated Sharapova in every one of the last 13 meetings. Sharapova has not beaten Williams in nearly a decade, since her freak victories in 2004.

Sharapova was the “defending champion” at the French Open this year, but only because of more dumb luck. She faced Sara Errani in the finals last year, a player who this year only managed to win one game in her semi-finals match against Williams and who was totally non-competitive against Sharapova as well.  In other words, Sharapova cakewalked into last year’s final the same way she did into this year’s, the difference being that last year the dumb luck continued right through the finals and this year it didn’t.

As if to drive the final nail into the coffin of Russian humiliation, while Sharapova addressed the French crowd in English (not Russian!) Williams did so in fluent French, saying that she had told her parents at a young age that she would do so.  Sharapova is by far Russia’s greatest tennis player (she not only holds as many grand slam titles as all other Russian players combined, but holds the career grand slam itself), yet she lives in the USA and learned her game there.  And when forced to confront the greatest American player, she routinely comes up very short.

Appropriately enough, though defeating Azarenka and reaching the finals, Sharapova’s ranking dropped from #2 to #3 after the tournament, Azarenka moving past her to take the penultimate spot.

19 responses to “Sharapova in Paris”