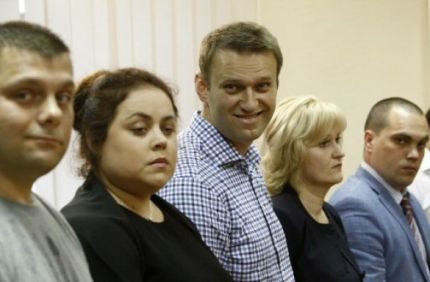 The only thing that was more sickening than the obviously prefabricated verdict against Alexei Navalny which was announced today in Kirov was the pathetic spectacle of Navalny smirking like an ape at a photographer as he stood in the courtroom before the judge in an open, short-sleeved casual shirt.  Near him in the foreground stood his partner, also convicted, smirking in a t-shirt and looking for all the world like a mafia goon.

You only have to watch the movie Gandhi to see how inappropriate Navalny’s behavior was, and how unlike the leader of a great protest movement who wants to show himself more civilized than the cruel regime his fighting. Though firm and resolute, Gandhi always behaved with the utmost respect towards the judges who convicted him on political charges.  And Gandhi brought the British Raj to its knees.  Navalny fraternizes with skinheads, acts like one of them in court, and has no chance whatsoever to be the savior of Russia.

Navalny was sentenced to five years in a penal colony, one less than the prosecution had asked for and half the time he could have drawn.  But as the treatment of Mikhail Khodorkovsky clearly shows, the Kremlin may well intend to keep Navalny behind bars forever (with a five year conviction, Navalny will conveniently be behind bars until the next presidential “election” passes).  There are three more sets of charges against Navalny already in the pipeline, the same pattern followed with Khodorkovsky.  Amazingly, Garry Kasparov’s website reported back in April that the five-year sentence and courtroom arrest that Navalny received had been ordered by Moscow after summoning the judge there before the trial began.  As if that weren’t enough, Navalny was not even permitted to cross-examine the one witness against him, nor to call any witnesses in his own defense.  So it couldn’t be more clear that this was a rigged judicial event in the Soviet style.

On Facebook, more than 50,000 Russians were invited to participate in a protest against the trial on Manezh Square in Moscow, but as of now less than 20% of them have accepted.  A new poll from Levada clearly shows that the spirit of opposition has waned dramatically under Navalny, not grown, and that is clear from the shrinking size of the protest crowds Navalny has been able to assemble.

But Navalny’s weakness was made most abundantly clear when the Kremlin did not hesitate in allowing him to place his name on the ballot for Mayor of Moscow.  The Kremlin knew full well that Navalny couldn’t come close to winning a free and fair election against the popular incumbent, that the election wouldn’t be fair and he’d be easily routed, and that he’d be in prison long before the votes were counted.  So instead of giving Navalny something to chew on, it handed him a candidate ID card and said:  “Knock yourself out, buddy. Good luck with that!”

Nonetheless, we see this conviction as a good result for opposition forces. It’s not going to cause a radical increase in opposition activity, nor will it make Navalny a hero or a better man, much less a Mandela.  But it does provide some moral high ground for the opposition, a useful martyr, and most of all it forces them to sink or swim. If they are to continue, they must have a new leader who will pick up Navalny’s standard and carry on. Almost inevitably, that person will be an improvement from the totally failed policies of Navalny himself.

As shown below, immediately after Navalny’s sentence was announced the MICEX Russian stock index began to plunge, fast approaching the 1,400-point psychological barrier. 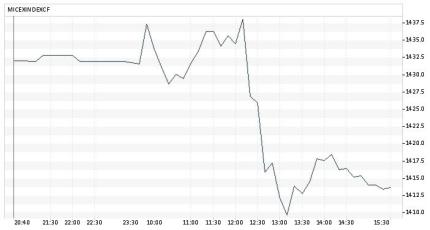 Once again, the Kremlin has shown it has no hesitation in using political charges in a commercial context. How can any Russian investor trust that he/she won’t be the next Navalny? They cannot, and that is why Russia continues to be plagued by one of the worst capital flight problems in the world.

10 responses to “Five Years for Navalny (for starters)”