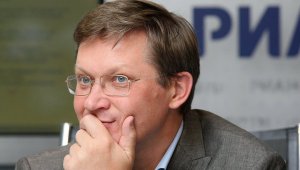 Maybe it was to be expected that even the best and brightest in the Russian opposition would start cracking up upon being confronted with the overwhelming evidence of their own failure, starting with the crushing victory of Vladimir Putin at the polls (despite their repeated promises that he’d be forced into a humiliating runoff) and ending with the spectacular collapse of the street demonstrations.  Where weeks before a hundred thousand turned out, post election barely a tenth that many did so.

But it’s still tragic to watch it happen to the likes of Vladimir Ryzhkov.  Almost like watching a beloved grandpa go round the bend.

END_OF_DOCUMENT_TOKEN_TO_BE_REPLACED

In one of the saddest commentaries yet on the so-called protest “movement,” poll results reported by RIA Novosti show that the “protesters” vastly prefer celebrity leaders like Leonid Parfenov, Boris Akunin and Yuri Shevchuk to political leaders like Vladimir Ryzhkov, Boris Nemtsov and Ilya Yashin. And not by a small margin, but by a factor of ten.  Aleksei Navalny takes second place to Parfenov, a man who has boldly declared: “I am a professional journalist, not a professional revolutionary. My job is to report, not to climb the barricades.”  Navalny, of course, has likewise never said he would be a candidate for office.

In other words, the man who the protesters want to lead them doesn’t want the job.  The D&G-rocking, iPhone-toting “protesters” want to be led by celebrity figures and be “cool,” not by political leaders and be successful. This is, of course, fully in line with our prior report which quoted one protester as observing:  “It all felt much more like a national holiday, a festivity. What’s more, not even a ‘festivity of disobedience’, but simply a festivity.” These folks are simply not serious, not worthy of respect, and no more a credible force for change in Russian politics than the yahoos of Occupy Wall Street.  In fact, OWS is far more potent and effective, which is pretty brutal condemnation of the Russian forces.